I’m not in the best of moods right now.  It’s time for some black humor.  However, the topic here is pretty gross.  If you’d like to skip it, no problem.  I’m here to talk shit, literally.

Public defecation on the Left Coast

Exhibit A here is a map of Silicon Valley, showing the location of several giant tech corporations.  Some of them track us nine ways from Sunday.  Others are limousine leftists who believe it’s their purpose to censor the Internet.  The following is a graphic merely of what they did after the Charlottesville setup: 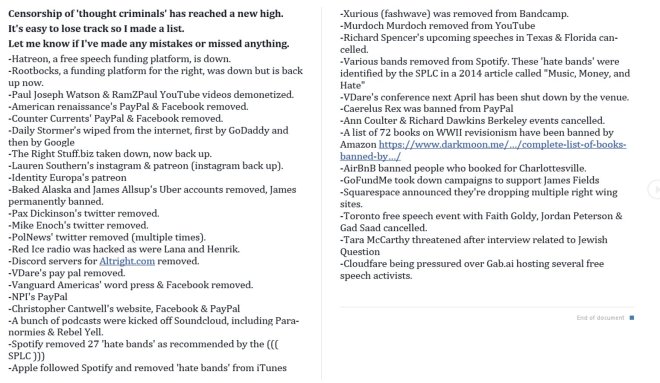 Cyberspace is an international community and one would expect it to be very ideologically diverse.  Still, some of the munchkins at these tech companies think the Worldwide Web should be run according to the political sensibilities of the Left Coast.  And here they are:

Now look to the top left of this map.  A large number of these corporations are based in San Francisco, the buckle of the Granola Belt.  (This includes WordPress, my webhost here, which has started to get into the “deplatforming” craze.  I have my content backed up, and if I get shut down, I know where I’ll restore it.  Furthermore, I’ll come back with both barrels blazing, no holds barred.)  Now look carefully at what neighborhood of SFO these corporations are in.  Got that?

Now here’s a handy map of public defecation in San Francisco – and these same corporations are very close to the poop epicenter.  Is this a cause, an effect, or just an evocative coinkydink – the sort of thing that Karl Jung would call synchronicity?  I’m not sure, but it just gives me a warm and squishy feeling.

More seriously, DO NOT walk barefoot in San Francisco.  Maybe that worked in the “flowers in your hair” 1960s, but not now.  They have a hypodermic needle problem too.  I haven’t been there in about twenty years, when there already was a major homeless problem, but I’ve heard that things have slid downhill.  As California continues to become more vibrant, thanks to unchecked population replacement immigration that began in the mid-1960s, these trends will likely rise.

Even so, it’s not just places like San Francisco and La-La-Land.  Seattle, another epicenter of poz, also has this problem.  A Seattle Times article about it included the following evocative item:

Councilmember Larry Gossett said he didn’t like the idea of power-washing the sidewalks because it brought back images of the use of hoses against civil-rights activists.

Oh, really?  Maybe this guilt-ridden nitwit needs to hit the streets, get on his hands and knees, and scrub off his city’s poop with a toothbrush.

Open defecation around the world

This seems to be an international phenomenon.  India, about to be the world’s most populous country, also happens to have the greatest public defecation problem.  According to another chart I’ve seen, there are 150-200 public poopers per square kilometer.  After a while, things are going to get a bit smelly, especially in densely-populated urban areas.  Here’s a world public defecation map.

It’s rather strange – ancient India had the world’s first sewage system; what the heck happened to those guys?  Things sure seem to have slid downhill after 4000 years.  I’ve heard that they brought the custom to the USA after the Hare Krishnas came in and started teaching their customs to the 1970s burnouts they recruited.  According to a story I’ve heard about one of their ashrams, they did their business on a hillside.  Things didn’t seem so bad in winter when snow covered it over, but when spring came, there were lots of little surprises that had to be carefully avoided.

Anyway, I have to wonder if all that dookey in San Francisco is only from homeless guys who don’t bother to find a public bathroom.  What about the H1-B employees that the tech giants are bringing in from India to drive down wages of high-tech workers?  Maybe they’re adding to the steamy mounds?

What an amazing coinkydink!

Is this Clown World, or is this a world of shit?

5 thoughts on “Is this Clown World, or is this a world of shit?”

go to "HedgeWik.com" for the new site. i'm too lazy to shut this blog down properly. plus the comments are funny.

Consider this an invitation to think

The online encyclopedia of race relations

History and Other Mysteries

In the course of its development, civilization eliminates heroism - ( Jean Lartéguy )

Author John Wear reveals evidence contradicting the narrative we have been taught about Germany, Japan & the Allies in World War II. WEARS WAR is the battle to bring FAKE HISTORY into accord with the facts.